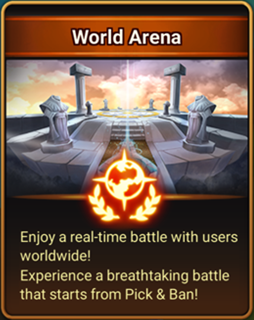 The World Arena, Real-Time Arena, or RTA for short, is a special real-time variant of regular Arena where players from level 35 to level 50 (MAX level) are matched up with players from other servers, taking battles to a global scale. Much of the same rules from regular Arena apply, with each player battling with a team of four select monsters, with the first to wipe out the opposing team being declared the winner.

However, there are some variations to the rules. Duplicate monsters cannot be chosen, nor can players choose the same monsters as their opponent. Both teams will take turns selecting at team of five monsters, with each player having the opportunity to ban one opposing monster to bring each team down to four monsters.

Like regular arena, players are awarded Victory Points upon victory, and deducted points upon a loss. Accumulated Victory Points will determine each player's ranking. Special rewards separate from regular arena will be handed out based on ranking and grade achieved before the end of each season (lasting approximately three months). Players will also be give Medals for each victory, which can be cashed in at the World Arena Shop.

Battles take place in the form of four on four monster battles. At the beginning of each battle, each player will each get a chance to form their team. Players will alternate between one another in their team selections based on the following order:

Once each player has their team of five, both will alternate and pick one opposing monster to ban from competing in the upcoming battle. Once this is done, both players will select a Leader Skill. Each player will have 30 seconds to decide their selections/ban, with a timer displaying the remaining time. If players let their timer reach zero, the AI will decide their turn automatically, and they will have half the time to decide their next selection. The timer will continue to halve in this way until a minimum of three seconds.

Once team selections have taken place. battles will progress in much the same way as regular arena battles. Whoever defeats all opposing monsters first wins the match. Unlike regular Arena, battles are real-time, with players alternating between turns, with turn priority based on total speed of each monster. Since battles are in real-time, each player will have a turn timer dictating how much time they have to decide their turn, with both players possessing 15 seconds. If the turn timer ever reaches zero, the AI will decide the player's turn, and will have approximately half the time to decide their next turn. The timer will continue to halve in this way until a minimum of three seconds, after which the timer will reset back to 15 seconds.

As the battle progresses, special effects will be placed on all monster. After 20 turns have taken place, all monsters will gain 10% more attack power, and lose 10% of their maximum HP. The same effect will apply every 15 turns thereafter, with the effects stacking over time.

Additionally, uniquely only to the World Arena, Violent runes can only trigger an additional turn once per turn.

At the beginning of each season, each player will be required to participate in 10 placement matches against random players. The match record accrued over these 10 placement matches will determine the player's initial ranking and grade heading into official matches. Players thereafter will be matched with other players in the same grade. Medals will still be awarded for victories accrued in the placement round.

Please note that your Victory Points won't be deducted anymore once you play the [Ranking Battle] again and this rule will only apply to the users that possess above 1,000 Victory Points.

After the end of every season of World Arena, all players will have their Victory Points reset, based on their Grade during the previous season. This will determine initial matchmaking during placement matches, which will determine each player's official starting grade.

In addition, once a season has ended, players may not participate in any ranking battles with other players until the official opening of the next season (Goodwill battles are excluded).

Player grade is determined based on a minimum set of Victory Points and meeting the minimum cutoff in overall ranking.

Each Victory will award Medals, based on the player's current Grade. These Medals can be used to purchase items in the World Arena Shop, including Mystical Scrolls and other Elemental Scrolls.

Players will also receive seasonal rewards, consisting of rare items that can't be obtained anywhere else. The transmogrifications in particular can't be obtained through either the Transmogrification Building with Shapeshifting Stones, or the through in-app purchase. Seasonal rewards are based on each player's end-of-season ranking and grade, with more items awarded the higher a player ranks. Each season offers a different set of rewards.

In addition to the decorative building "Statue - Legend of the Arena", players that achieved Legend rank at the end of the Season will have their name added to the World Arena's Hall of Fame.

Unlike ranked matches, Goodwill Battles can be fought after a season has ended, and before the next season has begun.

Regarding Goodwill Contests, players can either join existing ones or create one themselves. A Goodwill Contest can be public or private (Using a password), a custom name is set as well as a Contest Rule.

Players participating in World Arena have the opportunity to save replays of battles that they have personally participated in. This can be done after the battle has finished. These replays can be viewed at a later time at the player's convenience, and can also be shared with other players through both the in-game Guild chat room, as well as through the public chat room. Saved replays are stored for a limited time, disappearing after an update to the game client. Players may also deleted Replays from their saved list.

Up to 30 players may enter a Spectator Room at once. A separate in-game chat room will be set up specifically for each Spectator Room. Those who are spectating may Favorite one of the players of their choice, as well a Recommendation (the same user can only be Recommended once a day). Favoriting a player will allow that player's Replays to be accessible and viewed at any time. Up to 20 players can be Favorited.

The battling, matchmaking and victory points work the same way as for the regular World Arena battles.

Additional variations to the rules can be observed:

Player grade is determined based on a minimum set of Victory Points and meeting the minimum cutoff in overall ranking.

Each Victory will award Glory Tokens, based on the player's current Grade. These Glory Tokens can be used to purchase items in the League Shop, including past World Arena seasonal rewards and Medals.

Retrieved from "https://summonerswar.fandom.com/wiki/World_Arena?oldid=170764"
Community content is available under CC-BY-SA unless otherwise noted.