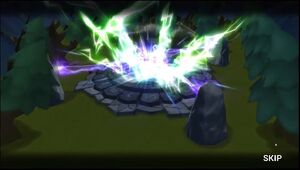 Summoning involves calling forth a monster from the Summonhenge building. It is one of the ways that players can obtain monsters in Summoners War. Summoning monsters usually involves a cost of some sort, such as by spending Crystals to summon directly, or by using a special scroll. All summons cost Mana Stones. Depending on the summon, higher star grade summons cost more mana than lower star grade summoning objects! (ex: Unknown Scroll costs 300 mana and Mystical Scroll costs 10000 mana)

Mystical summoning is nearly identical to using a Mystical Scroll to summon, with pool of monsters available and the summoning odds being completely identical. The only difference is the cost of summoning, as Mystical Summoning requires the payment of 75 Crystals instead of the 10,000 Mana Stones used for Mystical Scrolls.

While the crystal to summon ratio is basically the same as buying Mystical Scrolls from the shop through the Summoner Pack and Premium Pack, both packs also contain Angelmon as bonus items in addition to the scrolls, making the packs a better value than Mystical Summoning using crystals.

A Legendary Scroll is a rare type of summoning scroll. It is capable of summoning either a 4-star or 5-star monster, but usually a 4-star monster. It is among the most difficult scrolls to acquire in the game, after the Transcendence Scroll. Unlike other scrolls, Legendary Scrolls cannot summon awakened monsters. Furthermore, Angelmon, Rainbowmon, Devilmon cannot be summoned, nor can Light or Dark monsters. The summoning costs 50,000 mana stones in addition to consuming the scroll.

Exclusive Summoning uses Summoning Stones to summon, with each summon costing 50 Stones. Unlike other forms of summoning, Exclusive Summons draw from their own pool of monsters, with the summoning pool resetting on a weekly basis. Similar to using scrolls (outside of Unknown Scrolls) 3 star to 5 star monsters are available, excluding Light and Dark monsters.

Summoning Pieces are special monster pieces which, when obtained in enough numbers, can summon a specific monster at only an additional cost of 1000 Mana Stones. They can be found in the following areas:

The exact amount of pieces needed to summon a monster varies depending on monster grade:

You can buy Almighty Summoning Pieces from the Guild Shop at any time, and use them to substitute for any other summoning pieces (4-star or below). This is especially useful for getting more monsters out of short duration special events, like Hall of Heroes.

Scroll Pieces work similarly to monster pieces, except that they function identically to a regular scroll when enough is gathered. The amount of pieces needed to perform a summon depends on the scroll piece itself. There are two scroll pieces available:

They can be found in the following areas:

Community content is available under CC-BY-SA unless otherwise noted.