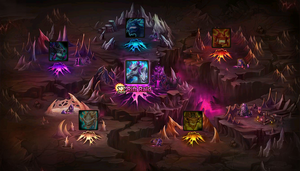 This area includes a total of six different Raid bosses, one of which requires players to work as part of a team of three to defeat. The other five must be fought individually. Participating in Raid battles can earn players several rewards.

When fighting Khi'zar Kha'jul, players must form teams of three, with each player allowed to bring up to six monsters to the battle. Similar to Guild Battles, players may only bring one monster of the same kind. Groups may be set up publicly, allowing anyone to join a party, or privately, allowing only invited players to join. Both Friends and Guild members may be invited to a party, or players can be invited through chat channels.

The battle itself is fought using the game's AI, with no direct interaction from the players themselves. Unlike regular battles, Raid battles utilize a special formation system allowing players to assign monsters to a "backline" and a "frontline".

Unlike regular battles, players can share Leader Skills with one another, with the bonuses affecting all players in a party, although the same Leader Skill types cannot be stacked. (i.e. Two HP leader skills cannot be used if they both affect fire monsters). However, Leader Skills affecting the same stat by different element may be used together (i.e. a general attack leader skill and fire attack leader skill can be used together). Buff effects resulting from skills or Runes are not shared across the 3 teams, and only apply to the team which used the skill or runes.

Once battle begins, each player will face off against one "head" of Khi'zar Kha'jul, each moving independently of one another and using its own attack gauge. However, the 3 heads do share a single HP Bar, as well as the same harmful effects. It should be noted that Khi'zar Kha'jul is immune to stuns, freezes, sleeps, provokes, and DOTs ("damage over time" or "continuous damage effects"). If one player loses all of their monsters, the head they were attacking will automatically begin attacking the nearest living ally.

If Khi'zar Kha'jul is defeated successfully by the party, each member will be given a set of rewards based on the boss' level, as well as the individual contribution of each player.

Players taking part in battles are ranked based on several criteria outlined below in order to measure each player's contribution to the raid battle. A minumum total contribution of 30% is required in order to be allowed to move up to the next stage/level. It appears that contribution level has no effect on reward distribution after a completed Raid.

The kind of rewards given out depends on the level that the raid boss was fought at. Generally, the higher the boss level, the better the rewards. Rewards are usually given from the following pool:

There are five Raid Bosses, each corresponding with a different monster element: the "Fire Beast", "Ice Beast", "Wind Beast", "Light Beast", and "Dark Beast". Each boss has the same elemental strengths and weaknesses as regular monsters. Battles against each of the five bosses works similarly to one another. Like battles against Khi'zar Kha'jul, players may set a frontline to help reduce damage taken by the backline. The more frontline monsters, the less damage taken by the frontline as well as the backline. However, unlike battles against Khi'zar Kha'jul, players must battle each of these bosses individually. Similarly, players may not bring duplicate monsters into battles here.

Just like most monsters, the five Bosses possess an HP bar. If players can take down a boss' HP to zero, it will fall into a "Groggy State" where it will be unable to attack. Once in this state, the boss' attack bar will reset and it will take more damage than normal. It will also be vulnerable to harmful effects in this state (all except inability effects, continuous damage, and attack bar decrease). The time a boss remains in Groggy State varies. Once the boss' attack bar is filled in this state, it will restore its HP back to full -- increased maximum HP -- and will deal increased damage.

The cycle will last until all of the player's monsters are defeated, or until the player brings the boss' HP down to zero twice (once before Groggy and once after).

Players are given out rewards when fighting each boss based on their rank, which is based on the amount of damage done (although some ranks can only be obtained from meeting certain conditions). Rewards are given from the following pool:

Every boss attempt will reward players with either a rune, an enchanted gem, or a grindstone at minimum, followed by elemental crystals corresponding with the rift beasts, and condensed magic crystals, regardless of rank. Higher ranks will award players with a higher grade rune, grindstone, or enchanted gem, as well as more elemental and magic crystals. Additionally, higher ranks will award players with a chance at Pure Magic Crystals, and other rewards in the prize pool. Getting a rank of S will guarantee Pure Magic Crystals as a reward.

Player ranking is based on the amount of damage to the boss, as well as meeting certain conditions (for higher ranks). Bringing the boss to groggy state will award 300,000 additional damage to the total for ranking purposes, while defeating the boss outright will automatically award players an additional 500,000 damage.

Each of the six Raid Bosses possess their own unique skills in battle.

Notice: The HP Values listed here are the Entire Boss's MAX HP, not the HP per head.